A celebratory pride flag-inspired balloon arch welcomed LGBTQ+ students and allies on the North Patio by the Center of the Arts. The event was co-sponsored by Pasadena City College’s Cross Cultural Center, PCC QUEST Center and Queer Alliance.

Jordyn Orozco, the coordinator of PCC’s Cross Cultural Center, used to be a PCC student. After attending PCC for a while, Orozco became a member of Queer Alliance, PCC’s club for LGBTQ+ students and allies.

“I got involved in Queer Alliance and then all of a sudden it thrusted me into student life and everything that the campus sort of had to offer. And so I started meeting all these LGBTQ and queer faculty and staff that really just sort of pushed me to do more, and to do better.” Said Orozco.

Students and faculty participated in an alternative bingo game where in order to yell “bingo”, enough questions and conversations needed to ensue. Rainbow boxes read tidbits like, “Likes sports” or “Has office hours before 9:00 a.m.” with a line underneath, to write in another student or staff and faculty member’s name.

Alex Peña, freshman, attended the mixer. Peña has yet to access QUEST’s resources but they intend on doing so in the future. Peña’s name was written on at least a couple different bingo sheets under the text, “Uses they/them” pronouns, which they had noted on a pin displayed on their jacket.

“I really like how the campus is so open to the support of the queer community. I remember my first week here–my dad dropped me off and we saw the progressive pride flag on the pole and then he came to the realization that, you know, this would be the school for me–simply because he knew I would be accepted here,” Peña said.

Students and staff were having fun engaging with one another–but with the event set to run for a single hour, some attendees were left wishing they had more time to connect and chat.

“It was a lot of fun! I wish it was a little longer. You know, I understand the fact that they had to keep it under a certain time. It would’ve been nice if it was longer. We were kind of in the middle of conversing with other people and then we just see them taking down the balloons and we’re like, ‘OK I guess the event’s over,’” Peña shares and laughs.

QUEST and PCC’s International Student Center will be hosting their last event of the semester. The center’s End of the Year Celebration event will be on Friday, December 9, 2022 featuring live entertainment by magician Simone Turkington. Dinner is included, with an option to note dietary restrictions. 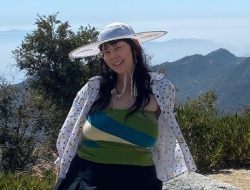