Captain Marvel: The MCU can do no wrong

Home /Top Stories, Lifestyle, Reviews/Captain Marvel: The MCU can do no wrong 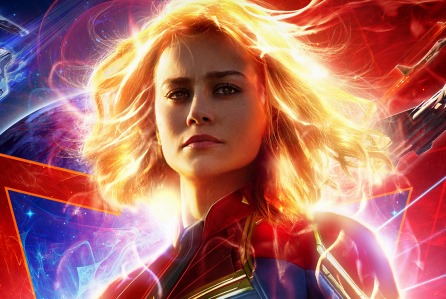 “Captain Marvel,” the 21st film in the Marvel Cinematic Universe, released this week with Higher, Further, Faster as the tagline, which is certainly the direction that the MCU is going after the edition of the new hero.

The movie stars Brie Larson as the title character, Samuel L. Jackson as Nick Fury, and Ben Mendelsohn as Talos, the leader of the Skrull army. When earth gets caught in the middle of a war between two galactic armies, Nick Fury teams with Captain Marvel to keep earth safe from the threat.

Before the film starts there is a touching and emotional tribute to the late Stan Lee, who passed away in November of last year, the brilliant mind and creator behind the iconic Marvel heroes. There was not a dry eye in the room when “Thank You Stan” read across the screen, and I was certainly apart of the group of individuals who claimed they “got something in their eye.”

The casting of the film was a grand slam, with Brie Larson killing it as Carol Danvers. She provided a charismatic performance as the hero and her chemistry with Samuel L. Jackson was rewarded with well written humor. Larson is going to make a stellar edition to the already great cast of characters headlining the next Marvel Studios film “Avengers Endgame.”

Another acting standout was Ben Mendelsohn as Talos. Though this performance did require him to wear a mask for the majority of the film, his character is a great and vital addition to the film as he really does a good job of humanizing a mostly alien character.

This was a very enjoyable movie. It being an origin story for a character I did not know much about, provided some skepticism, but with the success of other origin films such as “Iron Man,” “Black Panther,” and “Guardians of the Galaxy,” it really shouldn’t have.

The film does take some time to get off the ground, with some scenes in the beginning that were forgettable and just seemed like filler. But once Carol crash lands into earth and comes in contact with Nick Fury, the fun is nonstop and it really finds its identity and hits its stride.

Marvel is known for keeping fans in the seats throughout the credits, putting little anecdotes in after the credits roll and setting up future sequels or future installments in the franchise. The mid credits scene in Captain Marvel is one of the MCU’s best to date, and left the entire theater clapping and wanting more. Let the Avengers Endgame hype begin, if it hasn’t already.

Overall, Captain Marvel follows the successful Marvel formula with another great entry into the universe. Go into it expecting good laughs, exciting actions scenes and great chemistry among the fun characters of the film, and you won’t be let down. Marvel is in good hands for the future.

‘Faculty shouldn’t have to worry…

What to do with PCC’s…

Netflix’s Squid Game is the…

Kanye’s ‘Donda’ is a messy…

Sleepy? Get your caffeine fix…