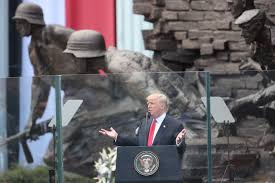 Over this past Labor Day weekend, Boston based magazine The Atlantic published an article claiming President Donald Trump called soldiers that died in World War I “losers” and “suckers.” The president disputes ever saying these comments. However, his past attacks on veterans and their families prove the president is unreliable to telling the truth.

“He’s a war hero because he was captured,” Trump said. “I like people that weren’t captured.”

Those were comments Trump made at a 2015 Family Leadership Summit in Ames, Iowa. He was speaking about Arizona Senator John McCain. McCain was a former Navy pilot who spent five years as a prisoner of war in a Vietnamese prison.

Trump saying McCain was a war hero because he was captured is pretty much saying that any soldier that was a POW was only a hero because they were captured. Any veteran who has served, captured or not, is a hero.

Trump should have nothing disgraceful to say about any veterans when he has never even served. According to a Business Insider article from 2018, Trump dodged his draft into the Vietnam War using student deferments four times in order to complete his education. He also used a fifth medical deferment from a diagnosis of bone spurs in his foot.

There was also the time in an ABC news interview with George Stephanopoulos, Trump attacked the Gold Star parents of slain soldier Humayun Khan, an army captain who died in a car bombing trying to save others.

The father of Khan, Khazir Khan, spoke at the 2016 Democratic National Convention. Khan’s mother, Ghazala Khan, stood by her husband’s side while he gave the speech. Trump suggested to Stephanopoulus that Khan’s mother didn’t speak because of their Muslim culture.

Stephanopoulus asked Trump how he would answer Khan’s remarks of him saying that Trump has “sacrificed nothing and no one.”

“I think I made a lot of sacrifices.” Trump said. “I work very, very hard and I’ve created thousands and thousands of jobs.”

“Those are sacrifices?” Stephanopoulos said.

Humayun Khan sacrificed his life to save others. It seems that Trump believes that creating jobs, taking care of education and being responsible for getting the Vietnam War Memorial built in downtown Manhattan are sacrifices. Those are not sacrifices.

On top of all that, he continuously told the American people that the deadly COVID-19 was nothing to worry about and that his administration had everything under control. We now know that wasn’t true. Washington Post Associate Editor Bob Woodward interviewed and tape recorded the president for his new book.

“It’s also more deadly than your, you know, even your strenuous flu’s,” Trump said in the interview. “To be honest I wanted to always play it down, I still like playing it down because I don’t want to create a panic.”

Because of Trump’s lies and downplaying the virus, there are over 190,000 Americans that have died of COVID-19. At one point jobless claims surpassed 40 million and to this day there are still many Americans without jobs from the shutdowns that were induced by the coronavirus.

If Donald Trump can undermine McCain’s war hero status, attack Gold Star parents and flat out lie to the American people about a deadly virus, then he is also capable of calling World War I veterans “losers” and “suckers.”

Why California’s climate crisis will…

To censor or not to…