Year-round athlete Merry Sanders, 19, co-captains the women’s water polo team and plays the position of utility. She also competes on the swimming team, and dives. This is her second year playing at PCC. “The hardest part is trying to divide up the time I devote to each sport, finding the time to practice adequately for both,” Sanders said. “I think both of my coaches; Terry Stoddard [swimming and water polo coach] and Tiffany Zupan [diving] helped me to establish a good schedule.”

An Arcadia native, she attended Arcadia High school where she played water polo for four years. Sanders is hopeful of transferring to Occidental College where she plans to major in biochemistry.

“I have been speaking with the coach at Occidental and let him know of my interest in the program,” Sanders said.

Sanders, as well as many other members of the team, cross train and compete on the swim team to keep in shape during the off-season.

“The four returning players from last year are in better shape now than when they left last season,” said Coach Terry Stoddard.

“Swimming is one of those sports where if you’re out for a week, you’re already behind,” Sanders said.

That is why Stoddard and her are encouraging underclassmen to participate in other sports outside of the water-polo season.

“No doubt about it, water polo teams stay in shape by improving their swimming condition,” Stoddard said.

“I plan on swimming through the pre-season right after a few days of R&R,” Sanders said “and I hope to start the swim season in better shape now than [I was at] in the middle of last year, in order to be even better my sophomore year. I also plan to start doing board work in the pre-season for diving to develop comfort, stability, and strength in my approaches off of the board,” Sanders said.

“There are true swimmers, true water polo players, and some athletes who are both. Merry Sanders is a three-sport athlete,” said Stoddard. For each season, Sanders has a sport, which means she continues to stay in shape year-round.

“I felt as though I was relatively successful last year in both sports. The reason I became so diverse and so dynamic is through all the years of practice,” Sanders said.

She began swimming at the age of six and began playing water polo at 13. She also likes to run when she finds time, and play volleyball. 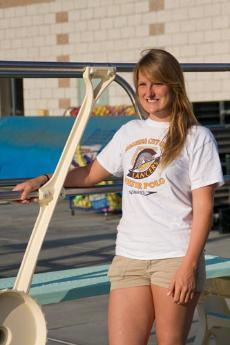