Rank No. 8 in the state, the women’s volleyball team easily defeated Los Angeles City College on Friday at Hutto-Patterson Gymnasium, making their record 4-0 in the South Coast Conference, and 10-1 overall.The Lancers beat LACC in a three game sweep, 25-10, 25-13, 25-17 in 55 minutes.

For the Lancers, this is their ninth straight win.

The Lancers’ height and athletic ability proved to bother LACC defense all night, especially 6-foot-1-inch Jessica Xu, who had 23 assists, 3 kills, and 4 blocks.

LACC did, however, play well in the third match giving themselves a 6-1 lead and a chance to win, but the Lancers fought back and soon had a 14-13 lead.

Patti Blasco contributed greatly to their comeback in the third match as she had seven kills.

“We felt too confident. We struggled in the third game. They are tough but we fought back,” said Blasco.

Middle blocker Miranda Doing finished off LACC by knocking down the final two kills to give the Lancers the win. Doing ended with seven kills and four blocks.

PCC had 40 kills, but had 15 attack errors which kept LACC in the game.

Head Coach Tammy Silva said that the team had too many errors.

“In the third [match] we had too many unforced errors that kept them in the game,” said Silva.

Silva, however, commends her team for staying consistent and focused.

The Lancers will indeed need to stay in focus for their upcoming games, especially undefeated El Camino College on Oct. 16.

Lancers next game will be against LA Trade Tech at PCC’s Hutto-Patterson Gymnasium. 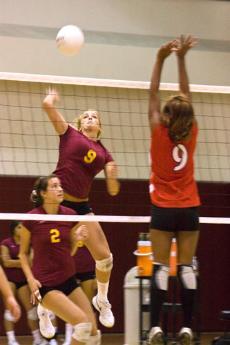 PCC’s Nicole Holmes prepares to spike down on LACC on friday. (Brian Warouw)