Kicking off their season with an 8-1 record, the Lancer Women’s Volleyball team hopes to continue playing well in its conference and further advance its regional and state standings, where the team has reached its first top ten state ranking.The team is currently ranked 6th in Southern California and 8th in the state, in a poll conducted by the California Community College Women’s Volleyball Coaches Association. According to Richard Lewis, Director of Sports Information, this is the highest state ranking PCC has ever achieved in regular season play.

Head Coach Tammy Silva, who has been with the team for three seasons, attributes their success to a renewed team dynamic and the addition of fresh talent to the 15-women team.

“Nothing about the coaching style has changed,” Silva said.

“Our defense and offense has stayed consistent. It just happens that every year we get better and more talented kids.”

Of the current roster, only three are returning players.

Libero Marissa Rangel, now in her second year with the Lancers, noted that though many of the women are new this year, they are not lacking in experience, as a majority of the team plays club volleyball and all have extensive high school careers.

At a recent practice in the Hutto-Patterson Gymnasium-they meet every weekday from 11:30 a.m. until 1:30 p.m.-the camaraderie between team members is apparent even during grueling drills, as the gym echoed with loud shouts of encouragement.

Assistant Coach Leslie Flores said that as a team the girls weight train three times a week, in addition to a schedule of agility exercises and conditioning.

Flores speaks of the team with nothing short of admiration.

“They put a tremendous amount of time and dedication into this,” she said.

“This year our subs work just as hard as our starters and they play just as much too.”

The team plays in the South Coast Conference, where rival school El Camino College has captured the state title the past two years in a row.

Interlaced with a sense of determination is a love for the sport in which they compete. Even through sweat and certain fatigue coaches and players smile; poke fun at one another; indulge in raucous laughter during water breaks.

Patti Blasco, a freshman and outside hitter, said of the team dynamic: “We’re always together, on and off the court. And before games, we try to meet up a half-hour before it starts to get into the zone.”

For now, their eye-on-the-prize mentality has coaches and players gunning for if not the SCC title itself, a top two finish-at least. But Galia Sotomayor, a returning middle blocker/opposite hitter, is willing to concede higher hopes: “We want to reach state and win!

The women’s volleyball team participates in full court scrimmages in order to prepare for future conference matches. The addition of new players is a main contribution to the team’s rise in ranking over the past three seasons. (Michael Cheng) 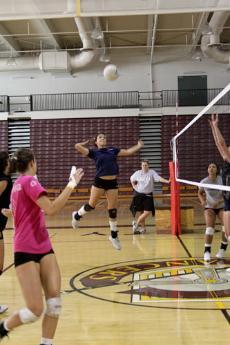 A PCC volleyball player jumps to powerfully send the ball over the net and at the defense. Three year head coach Tammy Silva diligently watches on the sideline for any mistakes that need to be corrected. (Michael Cheng)