Skip to content
By: Alumni Staff Posted on November 2, 2011

There’s hardly a better way to learn about the television production industry than directly from an accomplished sitcom writer. Sheldon Bull, a Hollywood television writer, producer, director and actor told The Society of Motion Picture and Television Engineers how competitive the industry really is, and what it takes to get into it.

“Think about how competitive you think it is and then multiply that by a thousand because it is way more competitive then you even dream,” said Bull on Nov. 1 in C155.

Born and raised in Pasadena, Bull graduated from PCC in 1972. Among Bull’s many accomplishments are producing shows such as, Newhart, A Different World, and Sabrina the Teenage Witch.

Although Bull was adamant about the intensive competition he added,  “I don’t say that to turn you off, I just say that to open your eyes.”

On a white board, Bull wrote four words: “talent,” “determination,” and “lucky break.” He explained that each of the words is needed to get where you want to be.

Even though Bull loved acting, he gave up it up because he decided that he wasn’t good at it. “You can’t control talent but you can develop it by figuring out what your talent is and then going towards it, he said.

Although one cannot control his or her talent, they can however control their determination. “If you have the determination to stick with it, then you can make it,” he said.

“What determination combined with talent can do, is lead you to a lucky break. You’re going to have to have a lucky break and you can’t control that either…but when that lucky break comes … be prepared, volunteer to help someone out on their film, make friends with your teachers and professors.”

An instructor in the audience praised the presentation. Carmen Porreca, television operations instructor said, “It was a great presentation. He was the biggest name we’ve had so far. [Bull was a] dynamic speaker and provided fabulous information. He was very realistic and I feel that students would be inspired and get some direction.”

One of the many students in the audience loved Bull’s speech. “It was amazing and informative. I loved his stories and I wish I had met him 20 years ago, I would of loved to work with him,” said Dot Canon, broadcast journalism.

He wanted to make sure the audience understood that they needed to be prepared before their lucky break came. “When opportunity knocks, you can open up the door but if you don’t have anything to provide to the opportunity, the opportunity is going to go to the next door,” he said.

“I worked for 25 years in Hollywood and I worked on 11 prime time sitcoms that were on at night,” he said. “The key to Hollywood is hanging in there and using your imagination to find ways to break in,” he said. 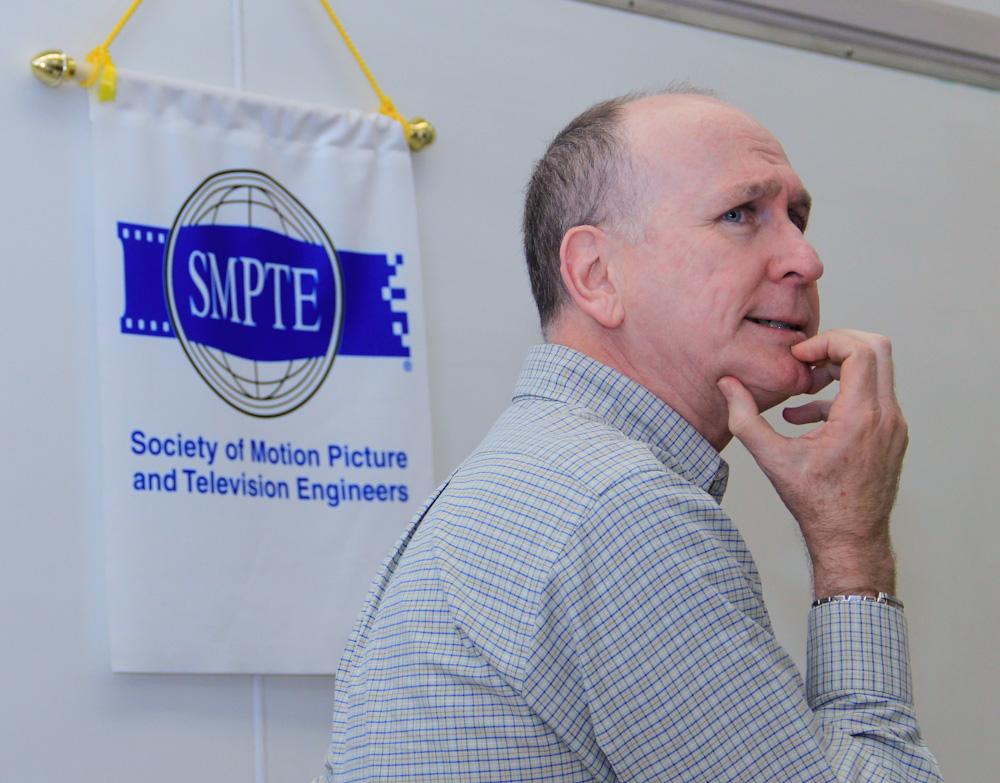 Sheldon Bull gives tips to The Society of Motion Picture and Television Engineers on Tuesday about how to get into the industry. (Ben Kong / Courier)