With a flaming moustache and goatee tattooed onto his face, Christopher Munch undoubtedly looks like a force to be reckoned with, but beneath the tough exterior lies the compassionate soul of a man seeking a greater purpose.”I decided I wasn’t going to let society dictate a path of standards for me,” Munch said of his tattoos.

As a member of the Scholars Block and the AS’s Cultural Diversity Committee, 25-year-old Munch has come a long way from his belligerent youth – he started doing drugs and drinking alcohol at the impressionable age of seven, never made it past sixth grade in a conventional school, and received his GED at 19 while in prison.

Describing himself as easy-going and open-minded, Munch admits that he is very hard on himself and is in fact his toughest critic. “If I don’t crack the whip, who else will?” Munch said.

After his release from prison, Munch put himself through cooking school and went on to become a private chef for the president of the Philippines.

“When I was in the Philippines I was living the high life, but at the same time I could go out and see a little girl eating out of a dirty bucket on the street,” said Munch.

Though he was paid and fed well, being in such close proximity to extreme poverty made Munch feel obligated to fight to make a difference in the world.

“For a long time I pursued what I wanted. I realized later that it was selfish and that having what I wanted was always at the cost of someone else,” Munch said.

Munch now plans to transfer to Cal Lutheran University where he will be working towards a degree in politics and religion, after which he plans to join the Navy.

One might speculate how someone with facial tattoos and almost every other inch of his body covered in ink can join the Navy. The answer is by undergoing several full-body ink removal sessions and getting rid of all but two tattoos: one of his middle name, and the other spelling out the phrase “trust in god.”

“[My tattoos] represented someone I once was but getting them removed is just a simple sacrifice to be able to move on in life,” Munch said.

Making clear that his views on faith are much more philosophical than religious, Munch said: “I feel aware that every step I take, someone is watching. I’m not religious and I’m not going to say that it’s the Christian god or Jesus or Buddha or whoever, but I do believe there is a higher power.”

Even through actions that are not so drastic, such as holding a door open for someone or simply smiling, Munch feels that any way one can positively impact lives, whether it be another person’s or their own, is a step closer to making the world a better place.

“He’s an amazing person,” said Matilde Restrepo, vice chair of the Cultural Diversity Committee. “He’s hard working and a strong leader, so having him on the committee makes it so much stronger.”

William Lockett, a close friend of Munch’s said: “Once you look past everything on the outside and see who he really is, you’ll discover that he’s a wonderful person. I want to see him go on and do great things.”

For Munch, who has traveled the world and slept under many trees, life has been far from a smooth ride on a gravy train with biscuit wheels, but he doesn’t let his rough past deter him from having the best possible future.

“No matter what obstacles life places in your path, stay true to yourself and give all your heart can give. All the rest is beyond our individual control,” Munch said. 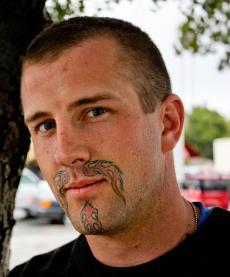