A packed audience came out to Café 322 in Sierra Madre on Dec. 3 to enjoy familiar standards by PCC’s Studio Jazz Singers. With every available table taken, many were left to stake out standing room spots in the Italian restaurant that regularly features live music.

“You guys feelin’ good tonight?” asked Alexis Soto Jr. during his rendition of “The Way You Look Tonight,” a tune first performed by Fred Astaire.

The crowd, filled with friends and family members of students from the Jazz Vocal Performance class, responded with enthusiasm, as they would to most of the performances that night.

“The Way You Look Tonight” was given an upbeat swing feel through the accompaniment of Tony Campodonico on piano, Russel Walters on upright bass and Vanessa Martinez on drums.

The talented trio ably changed musical styles and moods to back most of the night’s vocal performances.

Soto returned later in the program for a duet with Rebecca Thomas on the Frank Loesser-penned “Baby It’s Cold Outside,” one of the highlights of the night.

The two captured the song’s playful nature of a man attempting to prolong a date with a female interest.

Thomas showcased her character’s indecisiveness, responding to Soto’s advances both with flirtatious eye contact and a cold shoulder.

While Soto has been singing for about four years, the Jazz Vocal Performance class was the first time the aspiring singer-songwriter tried jazz singing.

“It pushes me to be a better singer and all-around musician,” Soto said of the class. “I apply it to how I write and arrange my own music.”

PCC Director of Choral Studies Don Brinegar made a special-guest appearance midway through the evening. His performance of “Have Yourself a Merry Little Christmas” received loud applause.

“PCC is blessed with a man who people travel all over the world to study with,” Studio Jazz Singers Director and the night’s MC Mary Durst said of Brinegar.

Later in the evening, Maile Schliewe was joined by Rebecca Thomas and Jane Kim for “Baby I Love You,” channeling the outspoken soul and swagger of the Aretha Franklin song.

This semester, students in the Jazz Vocal Performance class met with Director Durst for two hours each Monday.

To prepare for the showcase at Café 322, the students chose a repertoire of four songs of contrasting styles, and Durst assisted in guiding students to a style or singer that fit his or her voice.

Kim, who’s a classically-trained singer, spoke highly of her instructor.

“She’s strict, but she’s really cool,” she said. “You have to know your stuff.”

Durst is a lively personality who rides a Harley-Davidson motorcycle and has hair dyed a deep red color she describes as “hot chili.”

About half of her students had never taken the class before, and she was pleased with the progress they made this semester.

“They really improved since they first started,” said Durst.

“Some of them never listened to jazz. In order to do jazz, you have to saturate your life with it. 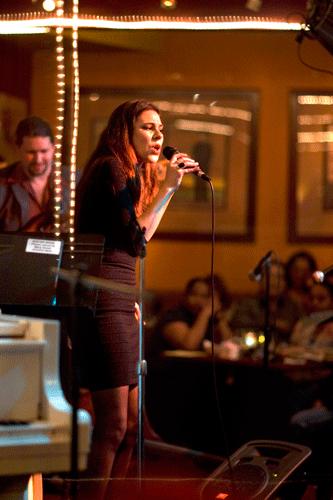