Skip to content
By: Alumni Staff Posted on February 22, 2012

Prolonged student outbursts delayed and disrupted the Board of Trustees meeting, but also prompted board members to walk out twice.

Trustee John Martin tried to alleviate the situation by approaching the students, but failed when the students lined up and circled behind the trustees, a movement that Interim Chief of Police Frank Scialdone found potentially threatening.

“That was when we called the Pasadena police,” Scialdone said.

Pasadena Police Department arrived to help with crowd control and keep the protesters from possibly swarming the building. Due to fire code regulations, only 180 people were allowed into the meeting.

Initially, PCC police had planned to allow people to enter as others exited, but Scialdone said that to keep the peace, they decided to lock down the building until protesters outside had dispersed.

The cancelation of 57 classes and the releasing of some faculty staff just one week prior to the start of the semester ignited a massive protest at the Board of Trustees meeting. Students demonstrated not only inside the board meeting, but were also outside the Creveling Lounge, chanting and holding signs.

The board meeting also heard testimony from several students and faculty, voicing their concerns on the budget crisis and its effects on campus, including the section cuts, the firing of retirees, and the funding of the U-Building.

Campus police boosted security in preparation for the board meeting, citing the protest on the first day of the semester and Occupy LA as their concerns. According to Interim Chief of Police Frank Scialdone, minutes in an Occupy LA meeting on Monday encouraged protestors to come to the meeting to “get rowdy.”

“Because of the demonstration yesterday and the volatile nature of the situation, we are taking these measures,” said Scialdone.

At 4 p.m., students inside the CC building were evacuated with the exception of faculty with offices inside. A security checkpoint was established an hour later downstairs while all other doors were locked and guarded. At 5 p.m., students and faculty were admitted into the building after their bags were checked for food, water, signs, and weapons.

Despite amped security, however, the Board of Trustees meeting lagged 30 minutes behind schedule due to loud protesting both inside and outside of the Creveling Lounge.

A similar protest erupted on Feb. 22, the first day of the semester when student activists encouraged students to mobilize by the Mirror Pools as a sign of protest against the section cuts and firings. Over 300 students appeared, confronting PCC President Mark Rocha in the process. 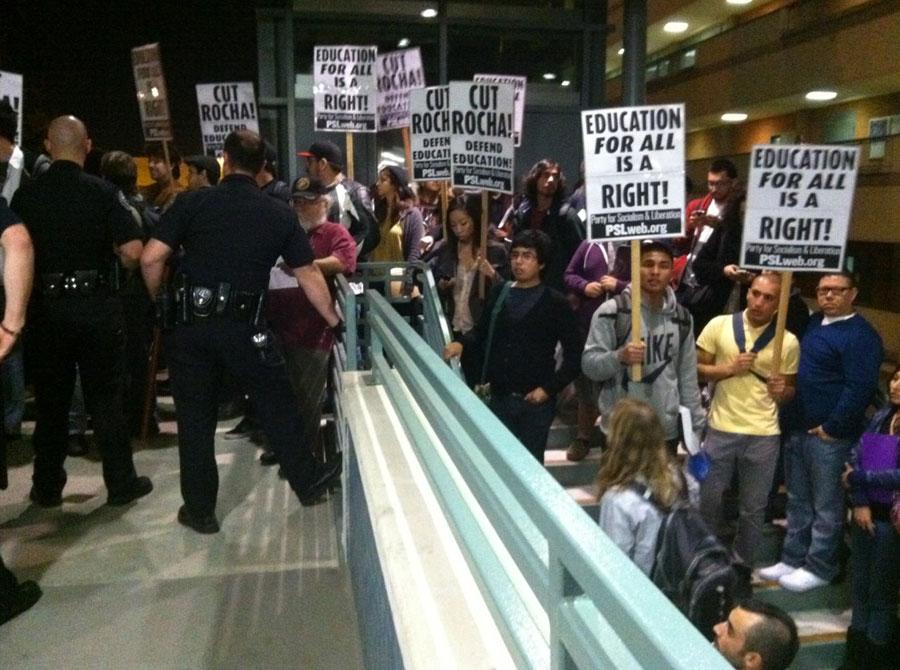