On the first unquestionably cold day of the winter season, Harbeson Hall was filled to the capacity for the free “Piano Ensembles Concert” held on Saturday evening.The program featured a total of 33 students performing 27 pieces, all centered on a holiday theme. Though the concert showcased pianists of different skill sets, they all shared a common love for the music they played.

Director Phillip Young, who served as the MC for the night, began the concert with a short and humorous description on how the program was chosen.

“If you’ve never been to Southern California before, we don’t have white Christmases here,” Young said, eliciting laughter from the audience. “And so our concert is in celebration of the non-wintry weather.”

Pieces ranged from slow and melancholy to rollicking and upbeat, with a good mix of the traditional Christmas fare (“We Wish You A Merry Christmas,” “Jingle Bells”) and other perennial classics, like “Hungarian Dance, no. 14 in D Minor.”

The cozy atmosphere of Harbeson Hall, its stage framed with red velvet curtains and the venue aglow with warmth from the yellow globe lights, enveloped the audience with the spirit of the season.

Sylvia Vargas, who heard about the concert from her daughter who is enrolled in one of the piano classes at PCC, enjoyed the performance because it allowed her to escape from her everyday worries.

“[The music’s] so nice that it can put you to sleep in a good way,” said Vargas.

“I didn’t think about bills or car payments or the rent while I was listening to [the students] play.”

The duo that stole the show was Claudia Hsieh and Dwight Winkler, who played “Berceuse pour une poupée malade (Lullaby For A Sick Doll)” and “Godfather Drosselmeyer’s Automatons” from

The Nutcracker and the Mouse King, op. 64.

Midway through the second piece, Hsieh, mimicking a wind-up doll, powered down and stopped playing until Winkler brought out a crank and wound her back to life, to loud applause and cheers from the audience.

The stage was arranged with two pianos facing each other, allowing for a total of up to four students to play at once. 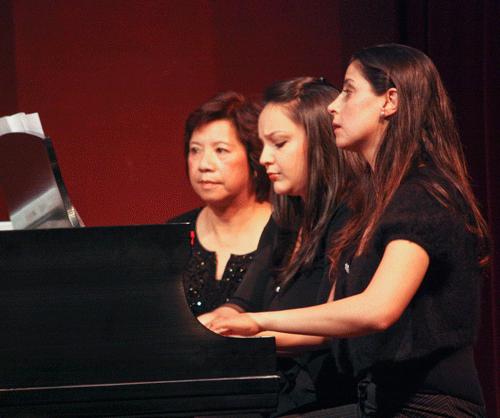