As part of PCC’s “First-Year Pathways” program, Luis J. Rodriguez spoke about his past struggles with drug addiction and violence, and the struggles many young people are currently having with these same issues on Oct. 14.

Rodriguez gave one of the many reasons young people are faced with these challenges. “Nobody ever told them you have a beautiful life ahead of you… Nobody’s helping them,” said Rodriguez.

Throughout the presentation Rodriguez focused on how important it is for teens and young adults to have someone who can be there for them. He believes that the solution to problems with drugs and violence is creating a sense of community at all times and under all circumstances. “Trouble is what makes community,” said Rodriguez. “Any trouble can be handled through community.”

Rodriguez then cited as an example one inner city gang in Los Angeles that he had recently worked in. Rodriguez and his fellow activists approached leaders of this gang, hoping to create a peace zone within the city. Rodriguez asked them for no more violence, drive-by shootings, or drug trafficking. The leaders of the gang agreed but asked Rodriguez, “Can you get us a job? Can you get us back to school? Can you get the police to stop harassing us?”

Rodriguez’ message was that respect is necessary and that ultimately, all people really need is community and that young people need to know they are not alone.

Rodriguez also talked about his memoir “It Calls You Back: An Odyssey Through Love, Addiction, Revolutions and Healing”, which is the sequel to his memoir “Always Running.” “In ‘It Calls You Back’, I talk about my failures,” Rodriguez said. “It is about how I couldn’t step up to what I needed to do as a father.”

Rodriguez told about his oldest son who was released from a 15-year prison sentence in the summer of 2010. After being released, Rodriguez’ son “decided to quit gangs and drugs,” Rodriguez said. “He now works with over 100 gang kids in Chicago.”

Rodriguez used his son’s story as an example of how people can change with the right help and support. “Everybody can change… But change is not easy if you live through heroine addiction,” said Rodriguez.

A student in attendance, Guadalupe Cervantes, undecided, agreed with Rodriguez. “I think people do change. It depends on you,” she said.

“What we all want and need is to get healed,” Rodriguez said. “People think healing means, ‘Get over it.’ That’s not what it means. It means, ‘Get through it.'”

“We all have to learn in our communities,” Rodriguez said.

Another student who attended the presentation, Sonia Landa, child development, said, “We need to make people feel part of communities.”

Rodriguez concluded the presentation by reading a letter from his oldest son. “It feels good to know I will not be on this next journey of my life alone…,” Rodriguez’ son wrote. “I smile because I finally made it home.” 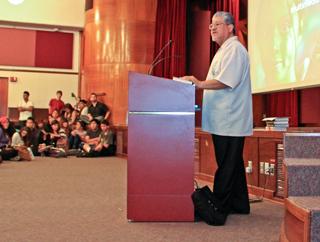 Luis J. Rodriguez spoke about his struggle with drugs to a crowded Harbeson Hall on Oct. 14. (Ben Kong / Courier)