Hidden behind the veil of effortless showmanship put on by PCC’s Theater Department lie the unsung heroes of the stage crew. These are the unacknowledged workers who make the magic of performances seem effortless and real.

Eric Larson describes his Technical Theater class as the team that essentially “builds the play.”

“We build all the scenery, props, hang the lights, set up the speakers, and the changes necessary for stage production,” he said.

Larson emphasized that the stage crew’s involvement throughout the actual performances is nonstop.

“We have to think on our feet for sure. There’s no margin for error, we have to get it done right then and there,” he said.

The stage production’s largest set under Larson’s tutelage consisted of a two-story set with the ability to rotate—a feat that took over two months of student man-hours to construct.

Fellow instructor Jim Sivas explains the perks of working with artists behind-the-scenes, “I’m a fan of the arts and its fulfilling to turn people on to the arts. I am here to inspire young people and in turn I am inspired,” Sivas said.

Recently, money-managing has been an issue for the theater department. “Our department hardly had a budget, so you can’t cut nothing from nothing,” Larson said.

“We have to be smart with how we spend our money; we recycle a lot. We managed to adapt, but budget cuts mostly affect the number of students we can take.”

The theater department’s seats have been cut from 584 seats and 620 students in 2009, to 569 seats for 579 students. “So we have more students than seats, but we work with it. It helps us get a healthy cross-section of diverse students,” Larson said.

“Working here for eight years and at least 48 productions, this place has been pretty memorable for me.” 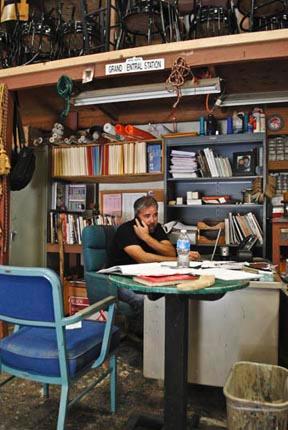 Eric Larson, technical theater instructor, works in his office in the back stage area of the Sexson Auditorium on Oct 25. (Ander Arostegui / Courier)