For several weeks now, campus cadets and police have been issuing pink warning slips to people smoking in non-designated areas. Citations for violations are still some months away. The slips are meant to inform smokers of the recent changes of policy.The new policy was approved at a recent Board of Trustees meeting, limiting smoking to four assigned areas.

Chief Peter Michael at PCC police department is hopeful that in one month everything will be in order to begin posting signs at campus entrances, which will state that smoking on campus in non-designated areas is prohibited.

“Hopefully by December or January [signs will be posted],” Michael said. From that point, there will be a 30-day grace period to educate people on the new policy before police begin issuing warnings and furthermore, citations. The cost of the future citations has yet to be determined.

“There can’t be an entrance to the campus that doesn’t have a sign warning campus users of the new smoking policy,” Michael said.

“The process will include taking the student ID card, copying the student number, issuing a warning, and logging the information into the police database,” Michael said. If that same student is found to be in violation of the smoking policy again and it is determined that he/she is a repeat offender, a citation will then be issued.

“I don’t think it’s right. No one wants to walk to the end of campus to smoke,” Ignacio Camacho, a smoker, said.

Students may be sent to Scott Thayer, the assistant dean of student affairs for counseling instead of being fined. If he finds a student to be a habitual offender, the ticket will go back to the campus police where the student will have to pay the fine.

“It’ll be nice to be able to go through the campus and not walk through clouds of smoke,” non-smoker Cameron White said. 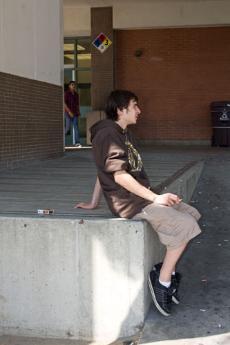 A student smokes outside of the R Building, in an undesignated area. (Michael Cheng)