Tucked away on the first floor of the C Building is the television studio where students learn how to put together broadcast worthy productions.According to Barbara Naylor, an instructor in the performing and communication arts division, students in the TVR 16b class are required to shoot four projects – a talk show, two dramatic scenes, and a music video.

Students in the class take on assignments that are identical to those found in the professional industry.

Marcus Velazquez, a student in the class said that students get to try their hand at being a director, associate director, technical director, lighting director, character generator operator, audio operator, camera operator, video and media control, and stage manager.

“Even if you only want to produce or direct, you can be better by understanding other positions,” said Velazquez, who has had the opportunity of interning at Dreamworks and Comcast.

In the studio, students also get a hands-on experience controlling lighting and operating switchboards

“By the time they get to 16b, students should already know how everything works around the studio,” said Jake Barragan, teaching assistant for both the TVR 7 and TVR 16b class.

One of the switchboards students get to work with is the Zodiak Digital Production Switcher, a machine that costs about $170,000.

“This is the only school where students get to work on this machine,” said Carmen Porreca, an instructor in the performing and communication arts division. “What you use here is the same thing you use in the industry, so students feel more comfortable.”

The class isn’t only about the technical side of the professional industry though. Students also get a chance to express their creativity when deciding on scripts, building sets, and casting characters.

Although few people actually decide to write their own scripts, students can pick scenes to reenact from their favorite television shows or movies, according to Velazquez.

On casting actors for productions, Velazquez said, “When we can’t find anyone from the theater classes we go out into the wild and deal with what we get. There are some duds at the beginning, but when we filter them through it gets better towards the end of the semester.”

Along with the satisfaction that comes from taking the class, the students also experience major problems like professionals do.

“Sometimes talent doesn’t show up or your classmates are absent and it causes a lot of frustration,” said Velazquez.

“[The class] gets you prepared for what you’re going to experience,” said Barragan. “When you’re in there it’s really a collective experience because you’re depending on so many people to get the job done and if you can’t depend on one person the whole production is screwed. 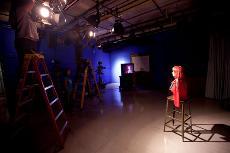 Carmen Porreca teaches students to use video and lighting equipment that is common within the television industry, on Monday. The students are practicing three point lighting in the studio. (Michael Cheng)