The California Public Employment Relations Board decided late last month that the District violated the law by unilaterally implementing a trimester calendar and ordered the administration to reinstate winter and post public notices identifying the error. 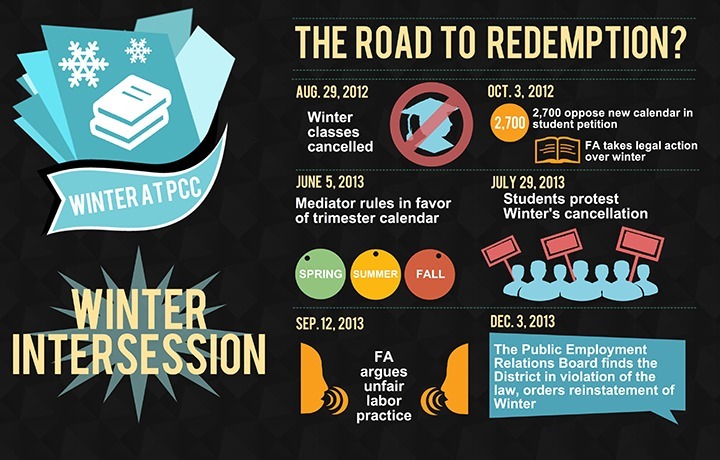 According to the PERB ruling, the District violated the Educational Employment Relations Act (EERA) by imposing the trimester calendar—a deviation from the semester system—that infringed on PCC’s established past practice.

Additionally, the document states that these actions have led to a contractual breach which amount to a policy change that affects the PCC Faculty Association scope of representation. Negotiations were also not adequately discussed prior the calendar change.

The District has also been ordered by PERB to “rescind the implementation of a trimester calendar at the end of [the 2014 – 15 school year] and restore a semester calendar no later than two weeks after the end of that trimester.”

Early in the semester, the Faculty Association filed a grievance with PERB accusing the District of enforcing an unfair labor practice. The FA characterized the ruling as a total victory for the faculty and students.

“We were deemed correct, we have prevailed,” FA president Roger Marheine said during the Dec. 2 Academic Senate Meeting.

Upon reviewing PERB’s proposed decisions, the District was quick to refute the verdict through a Dec. 3 statement.

Through recently released data, the District stated that student persistence and completion has showed marked improvement through the three-term calendar. They also indicated that the previous calendar reduced the spring semester from 17 to 16 weeks of instruction, while also shortening the number of seat-time hours from 54 to 48.

“This created a logjam of overlapping course start times that still makes it very difficult for students to obtain a full and convenient course schedule,” the statement read. “The facts are that during the ten years of the winter intersession, the state Chancellor’s Scorecard showed that most PCC student success outcomes declined, especially for historically underrepresented students.”

However, the FA has maintained that the winter session is a necessity for students.

“Winter session … has been completely endorsed through the deliberations of Shared Governance,” Marheine said, via email. “The FA stands behind all Shared Governance decisions and we are committed to pursue what is in the best interests of education, the students, and the college.”

The District intends to file an appeal with PERB.

In the meantime, notices will be placed around campus for at least 30 consecutive workdays that state that the District will cease and desist from unilaterally changing the school calendar from semesters to trimesters without notice, denying the PCCFA the ability to represent union employees in negotiating contractual terms, and interfering with inter-union dialogue.

Additionally, the District will have to compensate affected school employees for any losses suffered as a result of the calendar change.

Marheine suggested that the ruling will mark a “turning point” in the union’s ongoing battle with the administration.

“The ruling presents us with a tremendous opportunity as faculty, staff, and students to unite and take back our campus,” Marheine said. “We have all suffered far too long from a toxic work environment and gross mismanagement. The PERB ruling signals the turning point we have all been waiting for.”