The ivory keys were paired with a variety of instruments at Friday’s Piano Accompanying Recital at Harbeson Hall, but the most impressive one was the human voice of student Yasmin Biggs. Biggs dazzled the crowd with her performance of “Che farÂ• senza Euridice?” from Christoph Gluck’s opera “Orfeo ed Euridice.” With accompaniment from Sharon Chan on piano, Biggs filled the room with her deep, resonant voice. The audience was rapt with her expressive contralto, the lowest range for female singers.

Biggs colored the Italian vocals with vibrato to capture the grief of the mythical Greek figure Orpheus pining for his lost love Euridice- “No help or hope remains to me / Neither from the earth, nor from the heaven!” the lyrics translated.

Biggs said that she’s been singing since she was two years old.

“I was watching the “Figaro” cartoon,” she said.

“At Thanksgiving dinner, I got on top of the kitchen table and started singing.”

Though she started singing at an early age, Biggs got into opera in middle school.

“I wanted to sing on Broadway, but I was told that I have more of a classical voice,” she said. “I took that as a compliment.”

Biggs’ ambition is to pursue opera, and if her performance at Harbeson Hall is any indication, she’s likely to go far. She hopes to sing one day at the Metropolitan Opera competition in New York City, and to make her debut at the L.A. Opera House- performing the same role of Orpheus.

The recital also featured pieces with piano accompaniment to the flute, violin, trombone, clarinet, and oboe. On Francis Poulenc’s “Sonata for Oboe and Piano,” Katie Strobel’s confident piano technique made apparent her 13 years of playing, while keeping the focus on the part of oboist Ilana Cofield.

The two played through movements slow and swift, giving a public exhibition to their months of practice.

According to Strobel, she and Cofield met for class for an hour every other week, as well as twice a week outside of class to practice together.

Both plan on pursuing music careers. Cofield wants to get a graduate degree in performance as well as a teaching credential, while Strobel plans to study musicology.

Later in the program, pianist George Ramirez and clarinetist Carlos Herrera seemed to follow each other intuitively, matching one another in volume and intensity as their piece dictated. Performing the “Allegro appassionato” movement from Johannes Brahms’ “First Sonata for Clarinet and Piano in F Minor,” it was a fascinating interplay as the piece would slowly build in pace and strength and then back off to calmer passages.

Class director Laraine Stivers-Madden was pleased with the night, and noted that PCC is one of the few colleges that offer a course in piano accompaniment.

“[The students] kept the flow of the music going all the way to the end,” she said. “Sometimes nerves can take over in the middle, but they were well prepared. 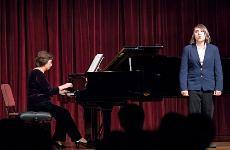