Local TV anchor Ted Chen spoke candidly in the Creveling Lounge on Sept. 24 to students and faculty about the complex issues facing China. “China’s pursuit of wealth and material success has expanded exponentially. Pursuit of money motivates people, there is less poverty but corruption and kickbacks with government regulation,” Chen said.

While it appeared to be a typical guest lecture, the presentation entitled “China Today,” surprised many in the audience as it ranged from topics like China’s automobile boom to the fate of journalism in the future.

Chen’s presentation detailed his experiences in Beijing for the 2008 Summer Olympics for KNBC.

Sent a year before the Olympics, he covered issues concerning the region and also China’s preparations for the Games.

The audience was shown a video compilation of Chen’s stories shot within that year. They watched as Chen biked through Beijing where there was an increasing amount of automobiles present.

He described the environmental problems that the boom was causing and how it was driven by a desire to climb the social ladder.

“If you can afford to buy a car, you’ve ascended to middle class,” Chen said.

Also shown were recaps of his Olympics coverage and a visit to a rural town outside of Beijing, contrasting the differences between the two regions.

After the presentation the audience asked Chen questions. He encouraged a variety in what they asked.

They probed his knowledge on issues like Taiwan and China relations, media censorship in Beijing, and how materialism has changed the Chinese ethos.

The PCC Asian Faculty and Staff Association sponsored the presentation and Interim President Lisa Sugimoto presented Chen with a Certificate of Recognition and Appreciation from the Association.

After being asked to pose for pictures, Chen joked, “It wouldn’t be an Asian-American presentation without pictures.”

Chen, a reporter for KNBC, the local NBC affiliate station, also serves as a fill-in anchor for KPCC, the public radio station located on campus. He described the campus as a second home and praised the transfer rate of the school.

Despite the talk’s Chinese content, there was a diverse audience present. Many professors brought their classes to watch Chen speak.

Jane Hallinger, professor of English, felt that it was necessary to bring her critical thinking class to the presentation to make it aware of the issues surrounding them in their daily lives.

“I feel like my students are not as interested in the news as much as I’d want them to be,” said Hallinger.

Hallinger has made 10 trips to China and was very interested to hear Chen speak on the transitions it has been making lately. She planned use the presentation to introduce the topic of China’s changes to her students.

Tim Lin, one of Hallinger’s students and a business administration major, recognized the value of the presentation.

“A lot of the videos shown were very interesting. I never knew about the car boom and I see now that it could pose a problem in the future,” Lin said.

The coordinator of the event, Cathy Wei, a professor of Chinese, felt that Chen’s presence really helped get the message across.

“The reason I wanted him to come was because Ted is a second generation Asian American who spent time in China and can share what he observed,” she said.

“It’s really a great learning experience,” she said. “It was more casual than a normal lecture and students had the chance to ask the questions that they wanted.”

Wei felt that by that introducing the topic, the community would begin to foster an interest in China. 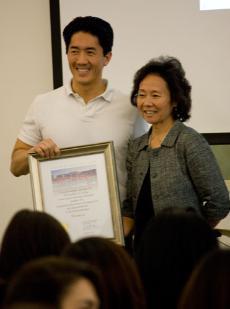