Skip to content
By: Alumni Staff Posted on October 7, 2009

Eating a tossed taco salad, heavy on shredded beats, alfalfa sprouts, and sunflower seeds, topped with a delightful tihini medley, environmental studies major Noah Puni tells of something he witnessed at his parent’s health food store. “I was working, and a woman’s little red-headed boy whines: ‘Mama, can I get a tofu taco?'” he laughs and then looks serious.

“I guess that is one of the times I realized how beneficial this place can be. I mean, how many little kids do you know that beg for tofu tacos?”

The place, fittingly named Grassroots Natural Market and Kitchen, is a health food store owned and operated by Noah’s parents, Marla and Meir Puni. It is located at 1119 Fair Oaks Ave. in South Pasadena.

Its present location has been home to a health food store for over 30 years, or since the shopping mall it is housed in was built. It was previously called Alta Health Foods.

The term grassroots has a symbolic meaning to it.

“Grassroots is a movement of the people, by the people. Our store has been involved in the health foods movement for a long time,” said Meir Puni, Noah’s father.

“By now you can see the influence it has had on conventional markets like Vons just by walking in.”

Meir Puni made an important differentiation between the bigger markets and his own.

“However influential we may have been, large chains like Whole Foods just can’t match the level of sincere, knowledgeable service most of our customers come back for,” he said.

Home to health gurus throughout Pasadena for more than two decades, Grassroots can easily be considered one of the birthplaces of the modern movement for healthy living.

The store itself caters to a wide spectrum of diverse tastes and preferences.

“Anything from vegans, vegetarians, to people who strictly eat raw foods, we have something for everybody. Our food is delicious, and above all, healthy,” said Marla Puni.

Along with a wide inventory emphasizing gluten-free products, the store is home to a quaint and friendly restaurant popular for organically stuffed burritos, delicious sandwiches, wraps, and salads, all made fresh daily.

Noah Puni finished his salad, and concluded his tale: “The mom of that ginger kid ended up saying no to him, and the kid got really depressed,” he laughs.

“But then again that’s why we’re here. Maybe that kid will come back on his own someday. 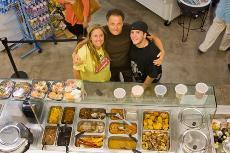 PCC student Noah Puni (right) and his parents Marla and Meir stand before the kitchen in the restaurant adjoining their health food store. (Michael Cheng)