Skip to content
By: Alumni Staff Posted on February 16, 2012

The decision to cut as many as 96 class sections and the refusal to renew the contracts of some adjunct faculty members a week before the start of the Spring semester has caused an uproar among students, faculty, and shared governance officials.

The Associated Students held a special townhall meeting on Feb. 16 to discuss the administration’s decisions, intended to help the school prepare for upcoming budget cuts.

“It’s a complete travesty — cutting education first,” said Alex Soto, student trustee.  “Students will lose financial aid because they might not have enough credits to qualify… the state and the college dropped the ball, now students are paying the price.”

In addition to the reduction of classes was the decision to not rehire 45 retirees, many of whom, according to Faculty Association president Roger Marheine, were past Academic Senate members and Risser Award winners.

“They are being replaced by cheaper adjuncts — President Mark Rocha’s own words,” Marheine wrote in an e-mail to the Courier.  “Over 80 sections were affected.  It is an utter disgrace that Rocha should treat distinguished faculty so shabbily.”

One of the main topics of the AS meeting was how to help students affected by the cuts.

AS intends to offer special help during the Week of Welcome in the Quad.  There will be counselors, computers for registering, AS members and other staff present all week to help make sure all students have a successful first week.

According to the AS board members, they are working on making scholarships available to students affected. Student workshops will also be held to help student get back on track.  There will also be a camera at the AS table during the Week of Welcome for students to inform administration of the affects the section cuts had.

In an e-mail addressed to the Board of Trustees, Marheine called for a postponement of all cuts made to the spring semester a day after Rocha had announced the section cuts and releases.

“The timing of the firings a week before school begins speaks to a managerial vision that is completely at odds with PCC’s long history of greatness,” Marheine wrote. “The 45 faculty had developed syllabi, arranged their schedules, and were prepared to teach.”

Board of Trustees President Geoffrey Baum replied, saying that the board had directed the administration to “respond to the state budget crisis and midyear revenue cuts to ensure the fiscal stability of the District while continuing to serve as many students as possible with the funding provided from the state.”

Marheine announced at the AS townhall meeting that the Faculty Association is considering plans for a no confidence motion in the college president because of Rocha’s handling of the situation.

“Cutting classes should not happen,” Marheine said. “Cutting 96 is unthinkable.”

The drastic cuts come at an alarming time, exactly one week before the new school semester was to begin.

In a message written on PCC Pulse, Rocha wrote that the state had announced an additional cut on top of the $2 million trigger cut already made to PCC.

The school will also have to make additional reductions to class sections in order to accommodate the $5 million cut anticipated if voters do not approve  Gov. Jerry Brown’s tax initiative in November.

“I wish this were all the bad news I reported to the Trustees. PCC’s actual cash flow situation is now so dire that we are preparing to borrow money temporarily to make payroll this summer,” Rocha wrote. “It is this cash flow situation that caused me to report we had ‘hit the wall.’ If we compare PCC to your family household, we are nearing zero in the checking account.”

Rocha reports that PCC has been permanently downsized by the state because of the removal of Prop 98, a model for funding K-14.

The model, which funded $4,652 to PCC for every Full Time Equivalent Student (FTES) in 2007, was discarded the next year. The state, instead, placed a cap on FTES funding, which according to Rocha, was ignored while PCC had continued to spend on additional classes

“No one – not the Governor or Legislature, not the Legislative Analyst’s Office, not even out own advocate, the Community College League of California predicts that our lost funding will ever be restored,” he wrote.

In order to stabilize PCC in the midst of fatal budget cuts, the Budget Resource and Allocation Committee will have to look into measures including section reductions for upcoming semesters and intersessions, determination of enrollment priorities, administration and faculty reduction, and the delaying of pay raises. 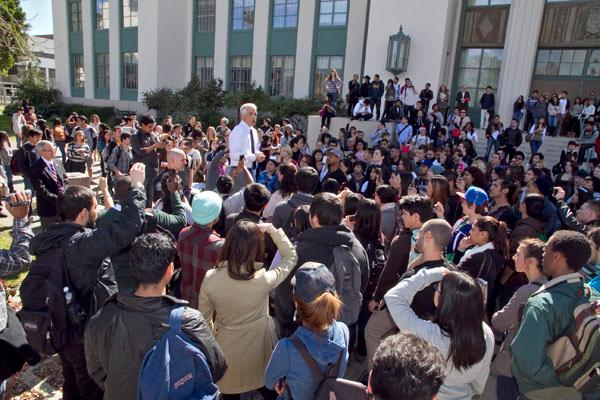 President Mark Rocha addresses a mob of students at a demonstration in front of the C Building on Feb. 21, the firs day of the semester. More than 300 students gathered to protest recent class cuts and faculty firings. (Natalie Sehn Weber / Courier)