Skip to content
By: Alumni Staff Posted on February 21, 2012

On the very first day of the semester, a large group of students protested outside of the C Building on Tuesday afternoon against last-minute section cuts and the release of some adjunct faculty members.

Hundreds of students mobilized at the Mirror Pools after being encouraged by activists to stage a walk-out of their classrooms on the first day of the semester. Five professors gave the green light to the activists who wanted to give their class a presentation on the administration’s decisions to cut classes and release staff a week before the semester began.

“I’m doing this because of students that don’t have classes,” said English major Lawrence Gandara, one of the student activists who informed classes about the demonstration. “I have brothers and sisters who are going to be [unable to take classes in the future] and if I don’t do something today, the obstacles are just going to be greater tomorrow.”

PCC President Mark Rocha exited his office in the C Building to meet with the protesters and was later surrounded by as many as 300 students, both those from the classrooms and passerbyers who received flyers from activists. While Rocha attempted to explain the budget situation, students shouted their concerns including reserve money and the reason for firing faculty staff.

Samantha Lozano, a political science major, shouted over the crowd at Rocha during the event, creating a brief back-and-fourth. She told him that he and the Board of Trustees should renegotiate their salaries to allow for more funding for classes.

“What brought me here today are the injustices that continue to keep happening through Dr. Rocha and all the other [Board of Trustees] members,” Lozano said.

“Students are organized, standing up, and fighting back,” Lopez said. “He’s hearing our voices. It might not have gotten through to him today, but it will eventually because everyone’s standing up.”

Jasmin Chacaltana, biology, is one of the victims of last minute section cuts, having two of her classes cancelled.

“I want the classes back,” Chacaltana said. “We’re going to keep fighting back until they’ve listened to us.”

On the other hand, business major Charles Alcantara wasn’t entirely confident that the demonstration would result in any change because the problems extend beyond the school’s administration or Board of Trustees and ultimately tie back to corporations.

“I think the message got across, but I don’t think anything [will change] at this point,” Alcantara said. “[Corporations] are trying to keep it so people can’t afford to go to school by cutting classes, so people are kept at the poverty level.”

Some students showed support for the college president, calling for a stance of unity. Brian Wells, a philosophy and journalism major, spoke to Rocha and called him a good man.

“Students need to focus on standing behind him rather than standing against him,” Wells said. “The only way we’re going to make good is by sticking together and being strategic.”

Amy Tang, a media studies major at UC Berkeley, had come back to the campus to visit a teacher when she happened upon the event. She said the event was a politically complicated situation that required coordination.

“I told him that he needs to fight with the students,” Tang said. “Something he doesn’t understand is a strategic [moment] because this is mob intelligence right now. He needs to instill the idea within their hearts that he will fight with them.”

The protest continued inside the C Building, just outside of Rocha’s office where over 50 students gathered. History major Sam Resnick said the demonstration was a good way of showing the administration how angry students were with Rocha’s decisions.

“This is a great turnout,” Resnick said. “This is our first action of the semester and I think it’s only going to get bigger if this is the turnout we got for the first day.”

“Twelve members of student government are not being listened to,” Fennessy said. “We need you to speak not just here, but everywhere: in their meetings, their offices, in your classes, to us.”

“We need your ideas. This is something we all have to do together,” he added.

The Courier previously reported that 96 classes were canceled as a result of California’s budget crisis. According to Vice President of Instruction Robert Bell, however, the number of classes canceled by the administration was actually 57.

“For the Spring semester, 57 class sections were ultimately canceled,” Bell wrote in an e-mail. “It is important to note that not all the class cancelations resulted from the response to budget crisis. Some cancelations result from adjustments in the placement of classes for the semester by instructional deans. This involves the cancelation of a class section to be replaced by an alternate class added into the schedule.”

According to Bell, readjustment cancelations started in December and continued until last month.

The decision to cut classes was triggered by the state announcing an additional $2 million budget cut on top of the initial $2 million cut the school had already planned for in January.

“This action, particularly so near the beginning of the semester, was an extremely difficult decision to make,” Bell said. “With the understanding that the cancelation of any classes is problematic for students and faculty, every consideration was given to affect class cancelations that would hopefully be the least disruption to students’ progress towards the completion of their goal.”

As of Tuesday, according to Bell, some of the more “primarily high demand, general education classes,” have been reinstated for the spring semester. 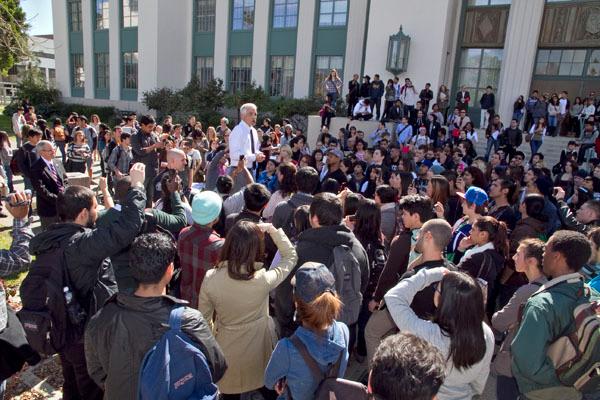 President Mark Rocha addresses a mob of students at a demonstration in front of the C Building on Feb. 21, the first day of the semester. More than 300 students gathered to protest recent class cuts and faculty firings. (Natalie Sehn Weber / Courier)