The Lancer defense shut down the Riverside Tigers for three quarters in a defensive struggle as they won the road game 38-7 on Saturday in Riverside. The Tigers did everything possible to prevent the Lancers passing attack from getting on track. Sticking to dime coverages and nickel packages the Lancers answered back with John Roberson who ran for 164 yards on 19 carries. The Lancers relied heavily on Roberson to carry the load during the early stages of the game.

Nick Ponce was forced to run and took multiple hits in the first half. The Tigers did a good job blitzing the quarterback, hitting Ponce on multiple occasions.

“I would rather pass than run but we were taking what the defense was giving us. I haven’t got hit a whole lot this season so it felt good to get hit,” said Ponce.

The Lancers passing game came alive in the second half to blow out the Tigers. According to Acting Head Coach James Kuk the offense needed time to get a feel for the timing of the plays and to get used to the defense the Tigers were using.

“They were rushing only three and stayed in cloud coverage. They weren’t trying to give us the big plays but we adjusted and executed. It was just a matter of getting used to the timing of the defense,” said Kuk.

The Lancers couldn’t get anything going until Ponce threw a 17 yard touchdown to Devance Harris in the first quarter; the extra point was blocked by Isaiha Holland of the Tigers.

The defensive battle continued until the end of the second quarter when Ponce, unable to find an open receiver, ran it in from the two yard line for a touchdown. The extra point was missed and at halftime the score was 12-6.

The Lancers tried running the popular wildcat formation numerous times in the first half with little success. In the third quarter they ran the wildcat and scored when Reuben Thomas ran it in from the seven yard line.

The Lancers scored 19 unanswered points until late in the fourth quarter when the Tigers finally put together a long drive and scored a touchdown, but the game was already decided at that point. The Lancers added another touchdown to end the game.

The Lancers continue to hurt themselves with penalties. They had nine penalties that accumulated for 96 yards.

Ponce threw for 332 yards and four touchdowns and also ran for another. Ponce was impressed with how the coaches adjusted in the second half to take control of the game.

“We made adjustments to the formations and giving the ball to different playmakers. I am lucky to have a great line and plenty of playmakers,” said Ponce

The Lancers next game will be the conference opener. The Lancers travel to play Bakersfield College on Saturday at 7 p.m.

The Renegades are 3-1 this season. Their only defeat thus far was against the No.1 ranked El Camino, 40-24. 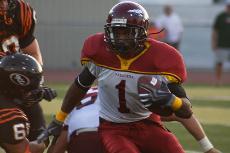