The PCC dance department presented three dances on Friday and Saturday, one of which had never been performed for a live audience.The company of 15 dancers performed the three pieces to perfection.

Of all three, the most breathtaking piece was Suite Inspirations, a composition dedicated to the late Michael Jackson. The music was a compilation of six of his songs.

It seemed as if this piece was important to all the dancers and their movements were heartfelt and sincere.

The dances made sense and flowed perfectly with the music.

It is apparent that the choreographer likes to choreograph in circles’, as multiple times throughout the evening the entire company was dancing and doing various things within a circle.

This, however, is not a bad thing. While the song Will You Be There played, during Suite Inspirations, the company danced in a circle while one dancer performed a solo in the middle of the circle. It was beautiful because it allowed every dancer to get the spotlight. No one dancer was favored and they worked as an ensemble not a group of individuals trying to piece together a dance.

The program said that the purpose of this composition was not to dance Jackson’s moves. The choreography stuck to this up to the point when one of the male dancers did Jackson’s famous crotch grab.

Each dance had a significant meaning behind it.

The first of the evening, The City in the Sea, was a tribute to Hurricane Katrina. It was based on the Poem (of the same name) by Edgar Allan Poe, which was read by Professor Gary Sterling.

The dancers’ moves complimented the words being read.

At one point the combined music and movements represented a tornado, which seemed appropriate to the piece. The moves were quick, sharp and precise.

The dancers were in synch with each other and complimented each other’s movements.

After each of the three dances the dancers came out and bowed as if it was the end. This was somewhat confusing because generally the bow is left for the very end of the performance.

Although the female dancers were wearing tights, some of the costumes used seemed quite raunchy. The costumes were, however, beautiful. The male dancers’ costumes also lacked some fabric during some dances.

Maybe this should have been said before the show began, as little children were present in the audience. 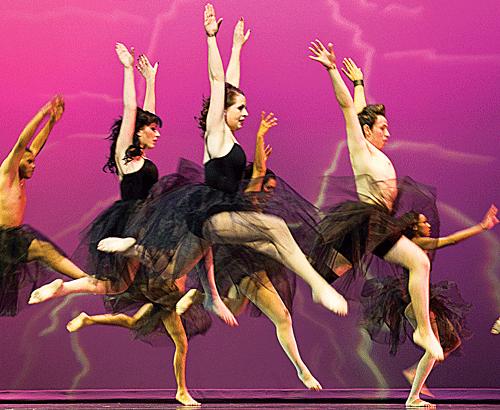