Skip to content
By: Alumni Staff Posted on February 23, 2012

With protestors outside the Campus Center Building as well as inside the Creveling Lounge for the Board of Trustees meeting Wednesday evening, the board  members could not avoid listening to the demonstrators’ cries and demands.

“Cut the B.S. not the classes,” chanted students gathered in the Quad from about  6 p.m. to protest the budget and class cuts during the scheduled board meeting.

The CC Building, where the meeting was being held, had been shut down and evacuated at 4 p.m. Even though Board meetings are open to the public with a portion even dedicated to public comment, not all the members of the public were allowed in because of the limited room capacity.

Those inside began chanting; “Let them in!” referring to the those outside who had not been allowed into the building.

Various other chants were shouted out before someone yelled out:

“If you support the students stand up!”

Most of the crowd stood up; a few remained seated.

The crowd, led by student Sarah Belknap, proceeded to walk around the board members chanting and reading their list of demands.

This prompted the board members to walk out of the room.

The protesters who had remained seated asked the ones standing to sit back down so the board members could return.

The standing students then agreed to sit; a few were hesitant.

Finally, they all ended up sitting, bringing the return of the board. However, later board members would walk out a second time and eventually return.

The usually quick public comment period overshadowed the rest of the items on the agenda, and took up most of the meeting time.

The students had control of the meeting at some points, disobeying orders from board members and continuing to speak when asked to wait their turn.

When Board Vice President John Martin asked the crowd to sit down, he was ignored by the crowd, many of whom continued to chant, “It’s not your turn to talk, you have to listen now.”

Most of the comments made were aimed at President Mark Rocha and the cutting of classes.

“A president is supposed to be chosen and I never chose you, Mr. Rocha,” said student Juan Flores.

Other comments  were addressed to the board.

“Presidents come and go but board members stay, it is up to you to work with us,” said Vlad Viski, political science.

Student Kem Turner told the board about not being able to transfer because she could not get a class.

“It is only one class, a lab class, one unit that is going to keep me back,” she said.

Associated Students Chief Justice Simon Fraser focused on sections being cut so close to the beginning of the semester when students had already enrolled and paid for classes.

“The Associated Students was aware that section cuts were coming, and [we were] hoping to work with the administration through the shared governance processes to make the best decision possible for all parties,” Fraser said. “However we did not expect the executive action to cut sections this close to a semester’s beginning with sections already enrolled in and paid [for] by students. We firmly believe that these specific cuts were the wrong decision to make.”

After the most of the public comments were done most of the angry protesters left the meeting and the tense atmosphere was all of a sudden peaceful.

When it came to discussing the rest of the items on the agenda, most had already left.

“I’m disappointed that the students came to register their views but not to listen to the whole record,” Rocha said. 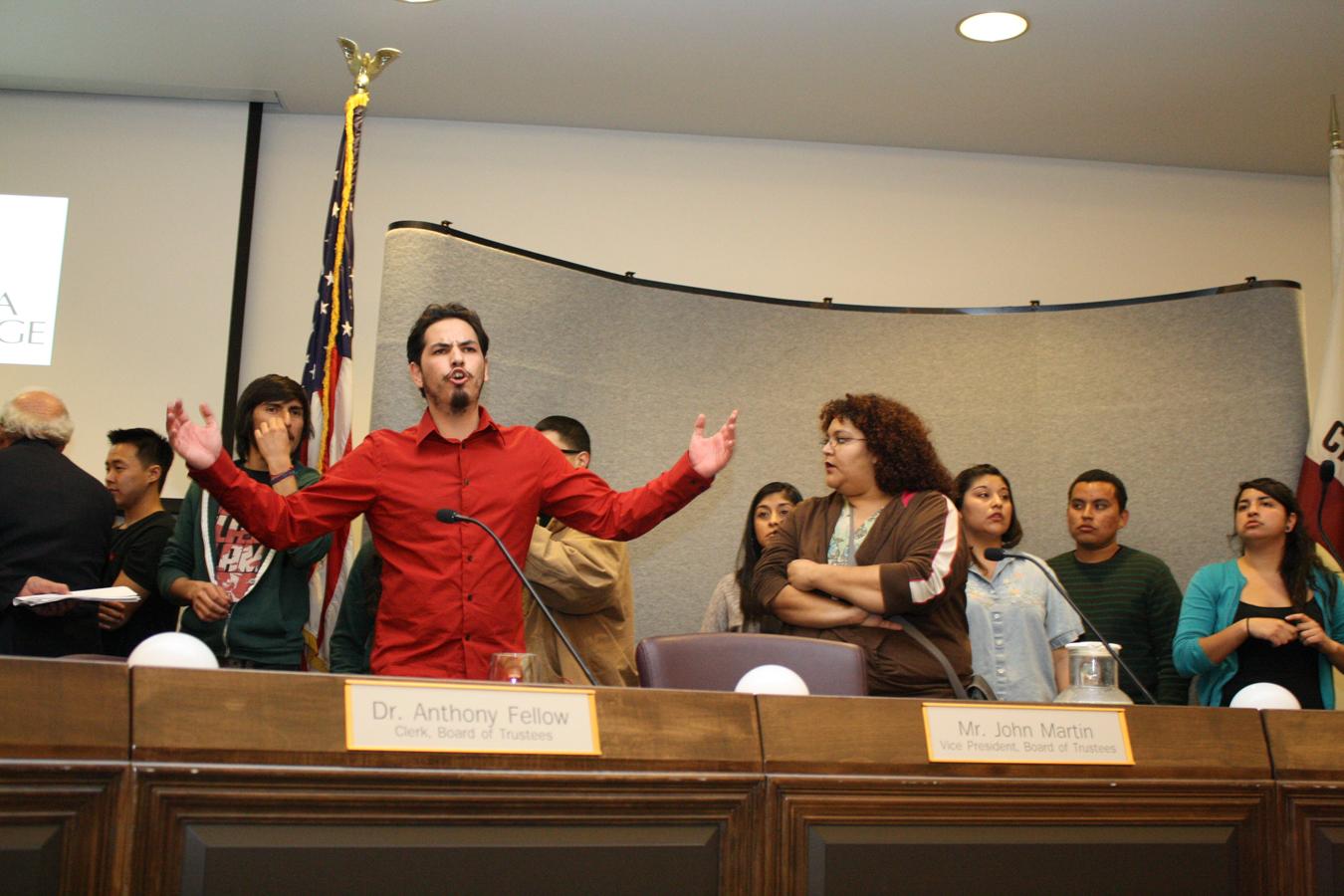 Student Bijan Bahmani speak at the Board of Trustees meeting on Feb. 22. (Nerio / Courier)