Sliding glass doors open, revealing a pristine corridor lit through skylights three floors above that bustles with arts and music students moving to their next destination in the newly opened $33 million building.

Welcome to the Center for the Arts. 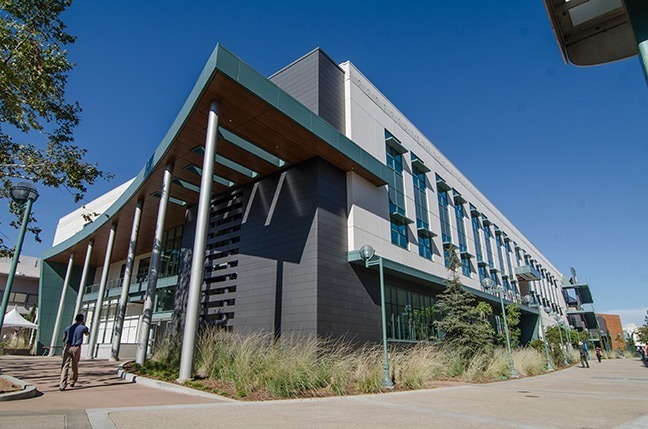 Spanning more than 83,000 square feet, 20 brand new classrooms hold the newest technology left for the hands of arts and music students to create and broaden their understandings of the arts.

Two rehearsal halls, which together seat over 120 students, await musicians to practice in. Students practicing their scales will break in 11 brand-new, hand-made Steinway baby grand pianos, costing more than $1.9 million all together, according to PCC Board of Trustees reports.

The faculty and staff of the Visual Arts and Media Studies and Music and Performing Arts divisions are still settling into their new offices, equipped with fresh paint and 3-D printers.

And thatâ€™s just on the first floor.

Itâ€™s been a project of epic proportions in the making, taking well over three years to complete, but costing over $20 million less than planned, according to Robert Miller, senior vice president of business and college services.

The project hit a major obstacle when the original construction company, Edge Development, went bankrupt in 2012.

Miller explained the bankruptcy was problematic, but was also a blessing in disguise.

Through the collegeâ€™s construction insurance, a new company, Kemp Brothers, came on board for the completion of the Center.

According to Miller, the original cost of the building dropped from more than $58 million to a little more than $32 million. Another upside was the building would be somewhat back on track to open for the fall 2013 semester.

â€œWe got Kemp Brothers, [who] promised to have the building ready on time for the fall term,â€ he said. â€œEven though itâ€™s been a great deal of effort in the last few months, the Center will be student ready.â€

And it is, for the most part.

Despite the hard deadline of the first day of school to complete the main building, the college kept its promise of opening the classrooms in the new Center on time.

According to Director of Facilities Rueben Smith, because the college had to switch construction companies, some exterior properties of the Center are still being built.

â€œWe plan to have an event in the new recital hall when it is done,â€ Smith said. â€œProbably right before Thanksgiving.â€

The theater and recital hall are scheduled for completion in late October, according to Miller.

For now, music students will still use Harbeson Hall and the Sexton Auditorium until the new Center sections open.

â€œSomething had to give in order for the main parts of the building to be ready in time,â€ Miller said.

While the Center for the Arts still has construction workers hammering away on new additions to the multi-million-dollar project, many faculty moving in agree the wait for the building is worth it.

Joseph Futtner, interim dean of visual arts and media studies, believed that while the construction completion was delayed several months than originally planned, the end product is mind-blowing.

â€œLook, nobody who has ever done anything remotely like this without issues,â€ he said. â€œ[But] when we saw the new building, all issues and complaints fell away.â€

Performing Arts Dean Jim Arnwine was ecstatic to move to the new building. His office still has unopened boxes, but the move is going well, he said.

The Center for the Arts is bringing both music and art together in one place for the first time.

â€œTo bring that all under one roof is nice,â€ Arnwine said. â€œTo see and hear art can only broaden a personâ€™s perspective of the arts.â€

â€œThis is definitely a gem for not only PCC, but for the city of Pasadena,â€ Smith said. â€œIâ€™m very proud of this building.â€

The official opening of the building will be in late January to early February, according to Miller.