Though the World Cup has recently ended, the soccer teams at PCC are just beginning to stretch their legs for the upcoming 2010 season.After a tough 2009 season for both the men’s and women’s teams, the entire soccer program is depending on its teamwork and camaraderie to bring them together.

Both teams are armed with brand new head coaches to implement changes and bring a winning record back, which is much more familiar territory.

“I have never seen that happen to PCC,” said newly appointed men’s Head Coach Edgar Manvelyan of the team’s 0-20-1 record for 2009. “We’ve never had a season like that. I’ve been involved with the program for a long time and we’ve never had a winless record.”

“Last year something happened. The group didn’t work so they made some changes,” said Manvelyan. “I have my new ideas here. I will promise that we are going to have a winning record; that’s what I’m shooting for. To have a winning record and to make it to the playoffs and hopefully we can build on that.”

As returning players, forward Rimar Daisley-West and defender Francisco Castro are hoping the new group of prospects mesh well with the returners, making for a more unified team.

Daisley-West said that the team’s biggest problem last year was that it had trouble playing together as a team. “Now, already starting from spring season, I’ve already seen people coming together and playing the game the way it’s supposed to be played,” said Daisley-West. “That’s what I’m looking forward to this season and seeing Coach improve that.”

“We needed someone to push us and make us become a family,” said Castro, echoing his teammate’s sentiment. “We’re starting to see that now. We’re together as one.”

When it comes to specifics, Associate Head Coach Warren Altounian hopes that keeping the ball on the ground will benefit the team.

“We’re a passing team,” said Altounian. “We want to run the ball through the defense, up to the midfield and attack with the midfielders and the forwards.”

As for the women’s team, Head Coach Randy Lilavois will rely on tactics, old and new, but doesn’t get into specifics.

“Just being a brand new coach and it being my first year, there are certain things that I definitely want to put in place,” said Lilavois, who has led the girls varsity team at South Pasadena High School and the boys varsity team at Crescenta Valley High School to California Interscholastic Federation post-season appearances. “Some are changes, some traditions. I think that our biggest plan is trying to do things differently now that there’s a different coach.”

Sophomore defender Analuisa Castro (no relation to men’s soccer player Francisco Castro) also believes that the women’s team (which went 9-10-1 overall and 6-7-1 in the South Coast Conference) looks to be gelling together nicely this year.

“I think we have good chemistry this year because we only lost maybe less than five people from last year and we have new additions so that’s really good,” she said.

With new head coaches who are well versed in the game and a more cohesive core, the men’s and women’s soccer teams have until Sept. 28 to get back on track before they begin conference play and get an opportunity to redeem themselves. 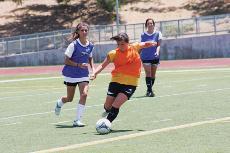