PCC honored arts patron Adelaide Hixon for her many contributions toward the works displayed at the Boone Sculpture Garden on Saturday.Meanwhile, the latest sculpture, “Baby Banana Tree” created by Yutaka Sone, had its official unveiling.

Sone’s “Baby Banana Tree” was completed during the fall 2008 semester and is a 25-foot tall colorful recreation of a banana tree made of steel and fiberglass.

Community leaders, family, members of PCC Board of Trustees and student ambassadors joined in celebrations of Hixon’s vision and generosity to PCC.

“I’m thrilled to be here for the celebration of the sculptures,” said Hixon. “It’s a glorious event.”

Hixon played a pivotal role in developing the vision of the sculpture garden as it stands today.

“At the end of day, the sculptures in the sculpture garden and the mechanics we had to learn and implement in order to [attain] successes, in essence, were an invitation and challenge to recalibrate our thinking about the role we play for our students in our community as a institution of learning,” said Alex Kritselis, dean of visual arts and media studies.

The sculpture garden currently features three different figures with their own distinctive characteristics.

Students know “Red Pine,” by Deborah Butterfield, best as the solid bronze horse that seems to have been pieced together to resemble driftwood. “Column Figure” by Stephan Belkenhol rests at the top of the water streams and was described by Hixon as “the boy that will [always] and forever be a student at PCC.”

Other important figures of the PCC community celebrated Hixon’s commitment to art and education.

“We’re glad today to join and celebrate Adelaide for her help in creating and defining the vision of art at a community college that’s rich and like no other,” said PCC President Paulette Perfumo

Sone also honored Hixon by presenting to her an early sketch of the “Baby Banana Tree.”

The Boone Sculpture Garden was constructed in April 1999, before including the three major sculptures that are now a staple on campus. 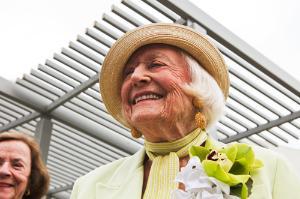 Adelaide Hixon received recognition at a sculpture unveiling on May 30. (Allan Santiago)