The celebration of the Chinese culture burst with bright colors and music to a captivated audience in direct contrast to the dreary weather at the Galloway Plaza on Oct. 25.

Students gathered around to watch a parade of costumes from ancient China and performances by Shaolin monks.

Much to the audience’s delight, the break between the runway show and the kung fu demonstration came in the form of free eggrolls that Cathy Wei, the coordinator of the event, encouraged people to take.

The event started with a brief fashion show that displayed clothing from the Sun, Xhou and Qing Dynasty as well as the Mongolian Yuan. Presented by the Global Club and those taking Chinese language classes, the students who wore the clothing were notably a mixture of different ethnicities.

Alex Wang, math major, was dressed in the traditional dress of an emperor of bygone times. “It’s very fancy. I feel like an emperor in the past wearing the costume. It’s like the Chinese dramas,” he said

Allen Chen, a business, accounting and Asian-American studies triple major, participated as one of the two emcee for the event, decked out in a costume representing the Sun Dynasty’s court officer.

“This is my second year as part of the Global Club here, [which is] how I got involved in this,” he said. “We’re a global club, but everyone thinks it’s just a Chinese club when it’s not. I love being a part of this.”

The event that garnered the most attention, however, was the Shaolin monks utilizing various weapons, from whips to swords to spears, as well as high-flying acrobatic tricks that received a smattering of applause from the audience and gasps of delight.

According to Wei, the monks came from the Henan Province, China and established a school of kung fu in Los Angeles in 2009.

Yan Liang Shi, the leader of the monks, and translated through Wei, said it is a great benefit for anyone wanting to learn Chinese kung fu to be taught by people who have dedicated their lives to it.

The audience seemed to be very appreciative of the lessons of Chinese culture and history through the event.

“It’s interesting to learn a new culture, and fun because it’s something you’ve never known before. It makes me want to go learn it, or at least try it,” said Tumanu Fesilafai, 19, biochemistry major, with a laugh.

Evette Gomez, 18, culinary arts major, said “I’ve never seen anything like it before and I was surprised by what they did. I learned more about the way they dressed.” 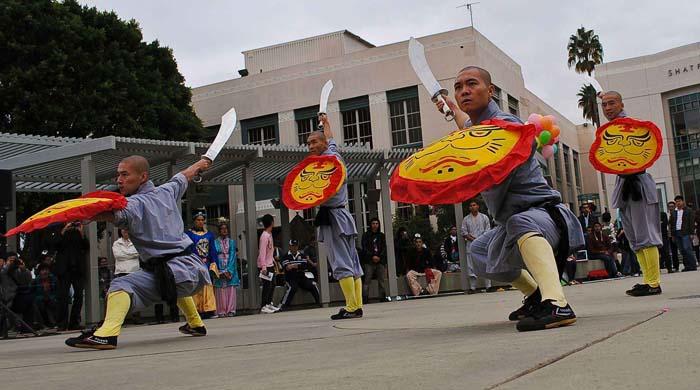 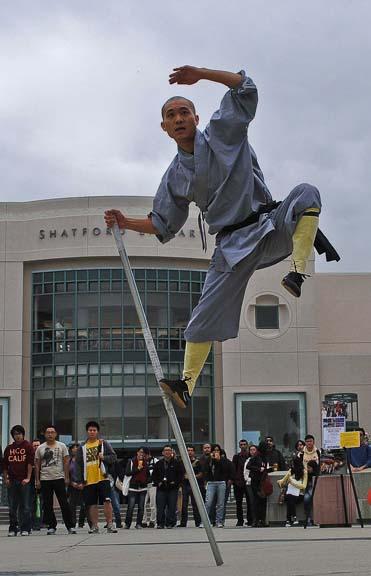