Renowned artist Abelardo Morrell recounted his past as an inspired photographer to an overcapacity audience Monday in his public lecture as the 26th Artist in Residence.

“I wanted to capture the realism of craziness,” Morrell said to the attentive crowd at the Vosloh Forum. “I seek craziness everywhere.”

Morell presented slides of photographs from his past and also work he produced leading up to his lecture.

Morrell said his work made him feel “reborn in an artistic way.” He said that his new approach to photography changed everything – from the way he shot photos, to the camera he used, and even his sense of emotion.

Morell described “Camera Obscura,” a technique for which he is most well-known and one that he used for one of his first photographs, as “essentially a small room with an opening looking out.

“I would poke small holes into people’s rooms so that images would pop out,” Morell said.

An example of his images  produced using the camera obscura technique was on the poster for the Artist in Residence program, which were handed out to eager audiences.

Now in its 26th year, the Artist in Residence program produced by the Visual Arts and Media Studies Division, brings nationally acclaimed artists to PCC for a full week of activities during which the artist creates and exhibits original artwork. The exibit of Morell’s work will continue in the Art Gallery through May 5.

Coordinator of this year’s event, Photography Instructor Melanie Willhide, said that Morell’s work is the “perfect marriage” of old and new ideas.

Morell thanked Willhide and complimented her work coordinating the program.

“Melanie [could] run the whole city if she wanted to,” Morrell said at the start of his lecture.

After the formal presentation, a reception was held at the Art Gallery where more of Morell’s work was displayed. Among those attending was Eileen Cowin, a photographer who participated as Artist in Residence herself in 2009.

“The lecture was fantastic and his work is brilliant,” said Cowin. “I understand that people want to know more about the technical aspect of his work but when it all comes down to it, it’s way bigger. His work is so poetic, so different. It really shows a new way to look at things.”

Others echoed her comments.

“The honesty of his [camera obscura] pieces intrigued me,” said Craig Attebery, art instructor, who loved the whole process it took to create each of Morell’s pieces rather than the final product. “What he’s doing really reflects on the pieces.”

Sonia Cardona, art, who is taking photography for the first time, said she was inspired by the lecture.

“It took me to a whole other level and gave me a different [perspective on] photography,” Cardona said.

“I really appreciate that he thinks about what he’s taking a picture of,” said Joyce Taihei, photography major. “His work is beyond camera obscura. I can take away from his simplistic approach.”

“I love the originality of his technique,” PeÃ…Âˆa said. “He uses something old and reinvents it in this new day and age.”

Daniel Carrillo, art major, found that Morell’s “Tent-Camera” technique was an interesting way of projecting an image on the ground.

“It was an extremely good and wonderful welcome,” said Morell. “The [art community here] is very lively and healthy, and I hope [art] students will get inspired to choose their own ideas to work with.”

According to Brian Tucker, Art Gallery director, the Artist in Residence usually generates a large audience, but this may be an exception.

“It’s not uncommon for the Artist in Residence to have large crowds,” Tucker said. “But this one right here had a strong turnout.” 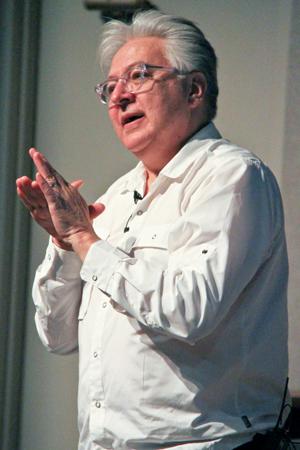