Abelardo Morell, A Cuban born, Boston-based photographer will be PCC’s Artist in Residence in 2012.

“Morell is best known for his images that showcase room-sized camera obscura projections,” said photographer instructor Melanie Willhide, who is coordinating the event.

Nationally and internationally known artists are brought to PCC and the Pasadena area community through the Artist in Residence program. The artist spends a full week on the campus exhibiting their artwork.

Along with exhibiting his work, Morell will create new work for the college art collection. He will also work directly with PCC students by doing lectures, demonstrations, and student portfolio reviews. The residency will be held March 19 through March 23.

Camera obscura is a method that uses an optical device that projects an image of its surroundings on a screen. This method led to actual photography. “His current work is based on images produced using a room-sized camera obscura, a technology that predates the invention of photography by more then two centuries,” Joe Futtner, the interim dean of the Visual Arts and Media Studies Division said in an email.

After using the camera obscura method, Futtner said, “These images are digitally photographed and become the work Morell exhibits.”

According to Morell’s website, he was born in 1948, in Havana, Cuba but fled to the U.S. when he was only 13. He attended Bowdoin College and received his Bachelor of Art degree in 1977.

Willhide was full of compliments for Morell’s. “The work is stunning and evocative…he is one of the most well respected exhibiting art photographers out there…I adore his work,” said Willhide.

Morell lists on his website some of the awards he has received. His most recent award was the International Center of Photography Infinity Award in 2011. One more of Morell’s achievements was The Decordova Museum Rappaport Prize in 2006. 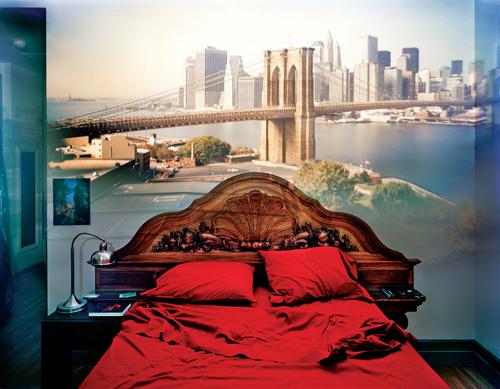